Even after 50 years, Conway and Korman will make you laugh whenever you watch them

This clip is from “The Carol Burnett Show”, in the video Tim Conway is really frightened by high places. We all know that Tim is an iconic comedian and in this sketch, he and Harvey Korman are two window washers in the middle of handling the work.

In the beginning, Korman said: “Where is that apprentice? He should’ve been here an hour ago.” That’s when Conway walks in and handed him a note that he must read instantly. Harvey began to read “Please make sure that the bearer of this letter, Virgil Frisbee, drinks his milk and takes a nap after lunch.”

You can see the shock on Harvey’s face while looking at Tim and asking him if the note is from his boss, Conway said: “No, it’s from my Mommy.” Harvey shouted at him and told him to get on the boards. Tim refused and told Harvey that he is scared of heights. Harvey stepped in, picked Tim and put him on the scaffolding, and told him “do not look down”. Without no hesitation, Tim looked down and started screaming and panicking immediately.

They started to go up by pulling their ropes while Tim is whining. For a second Conway started to feel a bit safe but he looked down and let his ropes go that’s when they began to shake. Harvey barely controlled the stands while Tim is so frightened he started to speak in another language.

“My whole life flashed before me. It was boring.” Conway said.
After a little while, they took a lunch break and sat on the scaffold, Tim didn’t notice but while getting the hot soup he poured some on his pants. Harvey took an orange and throw it to Conway but he failed to catch it and almost falls off.

Tim nearly died yet Harvey over here didn’t even notice anything, matter of fact he looked at him and told him to get back to work. While Tim climbed onto the sign a plane passed by making the scaffold lean back and forth leaving Conway hanging on the sign to stay alive.

Conway and Korman cracked me up as a kid. 50 years later… They still do. Comic genius!

At the end of the clip, Conway found a dead pigeon and Harvey told him to get rid of it. Tim didn’t want to get rid of it, Harvey stepped to get it and they started fighting over it until they dropped the pigeon and it make a very loud noise hitting the ground, Tim screamed saying: “Perfect landing. All over the statue.” This is when Harvey lost his cool and takes down the scaffolding leaving Conway shouting “ MOM!” and grabbing on the sign. 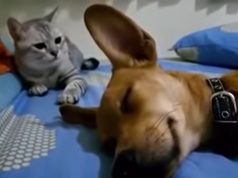 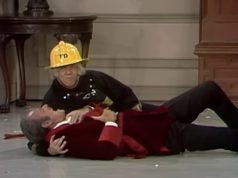 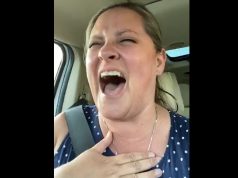